It is the stated policy of the Department of Corrections (DOC) Adult Parole, Community Corrections, and Youthful Offender System (APCCYOS) to transition “eligible DOC offenders” into a community corrections center to act “as a bridge” between incarceration and reintegration into the communities of Colorado.

Step 1. The inmate committed to the Colorado Department of Corrections – as a result of time computations – becomes eligible for a formal submission to a Community Corrections Program

The inmate’s community correction “referral destination” – that is where the inmate will end up – which comm corr program he will be assigned to – is determined by the following factors:

b. The offender must be determined to be an appropriate candidate under the guidelines of tha program.

c. An alternate referral may be made considering the following factors:

No Wants Or Warrants

charges have been resolved, there can be no referral. However, concurrent probation/community corrections sentences can still be referred.

Other Exceptions That Will Prevent Referral

1) Misdemeanor detainers with consecutive jail sentences are not be referred.

2) Misdemeanor detainers with concurrent jail sentences may be referred after the ”time served” has been satisfied.

3) Extraditable misdemeanor warrant/detainer/pending charges are ineligible to be referred.

Timing Of The Referral

If the offenders has been convicted of a violent offense they are electronically referred to Adult Parole and Community Corrections nine months prior to the estimated PED. If that offender has demonstrated acceptable institutional behavior, then the actual placement in a community corrections center may occur six months prior to the estimated PED.

Revoked Parolees and Other Issues

If a parolee has been revoked while on parole – he or she is not eligible to be referred until he/she has completed six months in a DOC facility and maintains eligible criteria. This referral is at 1he discretion of the case manager.

If the offender has been regressed because of a violation while IN a community corrections program, they are not eligible to be referred again until they have completed at least three months in a DOC facility and maintains all other eligibility criteria. Even then another referral is at the discretion of the case manager.

If the offender was regressed due to a major conviction – the inmate must complete at least one year in a DOC facility, demonstrate significant change, and then they may be resubmitted for community placement.

What Is Considered “Acceptable Institutional Behavior?”

“Acceptable Institutional Behavior?” to be accepted for applying into a Comm Corr Program means:

I) The offender who bas not been convicted of a Class I violation of the Code of Penal Discipline (COPD) within 1he previous 12 months.

2) The offender who bas not been convicted of a Class II violation of the COPD within 1he previous three months.

3) The offender who is not refusing participation in DOC recommended programs.

4) The offender who is not currently classified as administrative segregation.

(* See the regulation on this issue ‘Community Corrections Referral and Placement Process 250-03” for inmates serving time in Colorado for another state and mental health based issues).

Step 2. Two weeks prior to submitting the community corrections referral, the case manager notifies the inmate of his/her right to submit the “Offender Letter to Community Corrections Board/Center.” The application forms are scanned and e-mailed to the community referrals and moves unit at the time.

Here Are Sample Pages From The Application (click to emlarge): 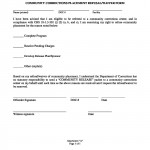 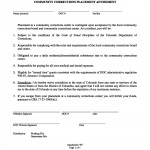 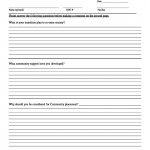 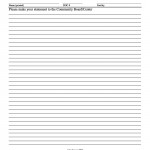 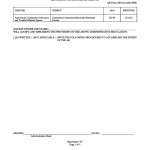 The inmate’s case manager makes a recommendation on the inmate’s behalf and then submits the inmates application electronically for by the Community Corrections Office within Adult Parole (CDOC).

The application contains an analysis of the inmate’s file to include the following information: (The analysis which is based on case material and the case manager’s knowledge of the offender.)

a. The Diagnostic Summary.

b. The Admission Data Summary.

Updates To the Applicant’s File:

The case manager must update the “Community Release Form” on the state’s computer system if there have been new climes, new programs completed, or new parole plans.

Each time there has been a change to the application – the information will be electronically referred to the Adult Parole and Community Corrections referral coordinator.

Usually An Application Can Be Submitted Every Six Months Or Sooner

If the case manager approves, an inmate may be re-referred to community corrections every six months if:

1) six months have passed since the most recent referral denial date;

2) the offender continues to be eligible by displaying acceptable institutional behavior; and

3) the offender has demonstrated significant changes.

Examples of “significant changes” include the acceptance into a DOC recommended specialized program, participation or completion of a DOC program, or any other change that could improve the offender’s chance of acceptance into a community placement facility.

Exception – A case manager can re-refer an inmate to community corrections without waiting the six months if the offender is 14 months prior to his/her estimated (mandatory release date) MRD and continues to be eligible by displaying “acceptable institutional behavior.” (See below)

Violations Of DOC Rules While The Comm Corr Application Is Pending

If an inmate is found guilty of a Class II Code of Penal Discipline charge after the referral has been submitted, the case manager will immediately notify the community referral coordinator for Adult Parole and Community Corrections.

If the offender is found guilty of a Class I Code of Penal Discipline charge after the referral has been submitted, the case manager notifies the community referral coordinator for Adult Parole and Community Corrections, who then “closes” the referral.

Step 3. The Community Corrections Office within Adult Parole (CDOC) then makes the decision to submit the application to the appropriate Colorado county community corrections board. The county is usually selected based on the county they intend to parole to. In the absence of a “parole plan,” the inmate is submitted to the county where the conviction and sentencing occurred.

Step 5. If the inmate meets the criteria of the county community corrections board – the decision is made to submit the case to the “short board” (quick acceptance) or whether the application, under the guidelines, must go the the “full board” for approval of the application.

The amount of time it takes to get to the community corrections board will depend on how many applications that county receives and sends to the board for review. Boards such as Denver’s board are often backlogged with applications.

The community correction board, on the date set for review of the application, will usually make an immediate up or down decision to approve or deny an offender. However, at times they will “table” the decision to the next board meeting.

If accepted, the community corrections board enters its decision into the state database, which has the effect of notifiying the referral coordinator AND the facility case manager of the decision.

If accepted, the offender’s name is placed on a wait list.

Preparation of 1he Offender for Movement to a Community Corrections Center

When the case manager receives the “move list,” he reviews the case to ensure that the offender is approved to move then sends an ”OK TO MOVE” message to the movement coordinator.

On the other hand, if the offender is not ready to move, a ”NOT OK TO MOVE” message is sent indicating 1he reason.

Upon receipt of 1he “OK TO MOVE,” the inmate is transported.

If the offender is denied, the file goes back to CDOC Community Corrections for submission and at that point the application may be submitted to a secondary referral county. They make this decision – it is not automatic. It is their and only their decision, whether to target a secondary placement. If they do – the application is re-submitted to a second or even a third program for approval or denial. If not – the periods of delay (see above) kick in.

ABOUT THE AUTHOR: H. Michael Steinberg – Email The Author – A Denver Colorado Theft Crimes Criminal Defense Lawyer – or call his office at 303-627-7777 during business hours – or call his cell if you cannot wait and need his immediate assistance – 720-227- 2277.

If you are charged with A Colorado crime or you have questions about the topic Transitioning From The Colorado DOC (Prison System) To The Colorado Community Corrections System (Half Way House System), please call our office. The Law Offices of H. Michael Steinberg, in Denver, Colorado, provide criminal defense clients with effective, efficient, intelligent and strong legal advocacy. We can educate you and help you navigate the stressful and complex legal process related to your criminal defense issue.

H. Michael Steinberg, is a Denver, Colorado criminal defense lawyer with over 30 years of day to day courtroom experience – specializing in Colorado Criminal Law along the Front Range. He will provide you with a free initial case consultation to evaluate your legal issues and to answer your questions with an honest assessment of your options. Remember, it costs NOTHING to discuss your case. Call now for an immediate free phone consultation.

Contact A Lawyer with Three Decades of Experience as a Denver Criminal Attorney at The Steinberg Colorado Criminal Defense Law Firm Today.